ONE OF THE MOST RESILIENT NETWORKS IN PAKISTAN

Transworld’s global network is one of the most resilient networks in Pakistan. We have peering agreements with Tier 1 operators on both Eastern and Western routes through multiple submarine cables, which ensures unmatched redundancy and zero downtime.

Transworld is the only operator in Pakistan which owns its submarine cable system called TW1. We are also the consortium partner of the information superhighway SEA-ME-WE 5. TW has ample restoration capacity on SWM4 and AAE-1 cables for route diversity. To further improve resilience, Transworld is already engaged with SEA-ME-WE 6 submarine cable system which will further enhance the connectivity of Pakistan.

Transworld has a matchless footprint across the globe through special capacity arrangements with its international partners. Leading organizations like Cogent, Telecom Italia, Omantel, and others make our connectivity reach both east and west of Pakistan with the lowest latency. Our peering arrangements with Google, Facebook, DE-CIX, Equinix and local Content Delivery networks from Google, Face book, Akamai, Netflix and Cloud flare provide an unmatched user experience.

The company is all set to establish its own POP’s in the United States and the Far East for world-class quality and resilience.

With its state-of-the-art landing station in Karachi, Transworld has its POPs established in all major cities of Pakistan. It has arrangements with multiple long hauls and local loop operators for the provision of seamless connectivity across the country to its local and global customers. TWA has also deployed its state of the art WSON based nationwide long-haul network in Pakistan which will become operational in 3rd quarter 2019.

By the virtue of its ultra-modern network, own private cable, international peering with Tier 1 operators and strong local presence, Transworld gives inimitable SLAs to its local and international customers.

Transworld Nodes Are Located In The Following Cities: 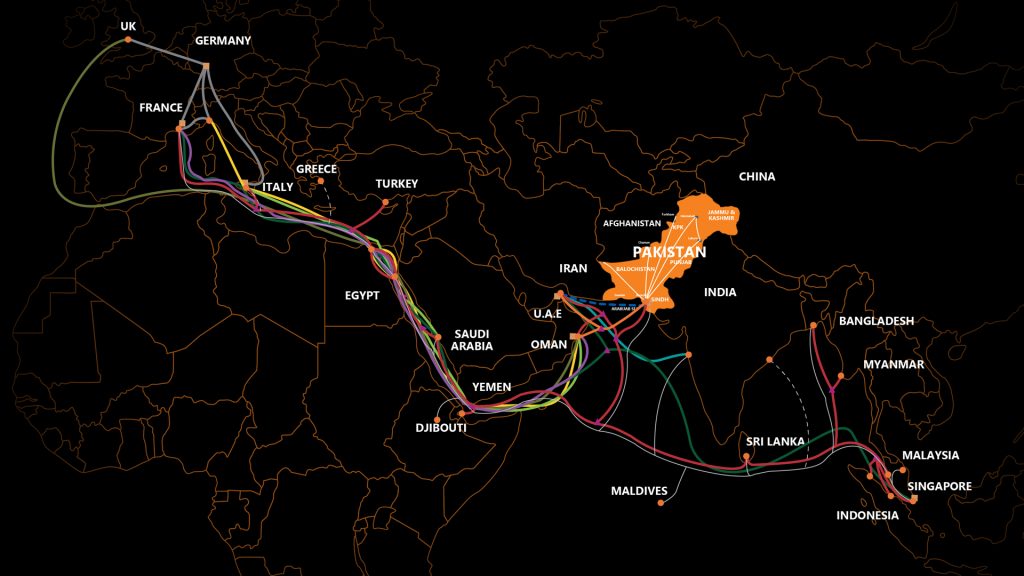 Transworld’s Node Are Located At The Following Cities: